David S. Godkin co-founded Birnbaum & Godkin, LLP in 2005. Mr. Godkin is a trial lawyer with nearly 40 years of experience litigating and arbitrating complex business and intellectual property disputes. He has a national practice, and has tried cases to juries, judges and arbitrators throughout the United States. He has argued appeals in federal and state appeals courts. Mr. Godkin is also an experienced arbitrator, and a member of the American Arbitration Association’s Commercial and Employment  Panels, the FINRA Arbitration Panel, and the CPR Panel of Distinguished Neutrals.

Mr. Godkin holds the highest (AV) rating given by the Martindale-Hubbell Law Directory. He has been selected as a “Massachusetts Super Lawyer” each year since 2004, based on ballots sent to 37,000 attorneys across Massachusetts by Law & Politics Magazine.

Mr. Godkin is involved in many community activities involving law and the arts. He is a member of the Board of Directors of Lawyers for Civil Rights and the University of Vermont Foundation. He has been actively involved as lead counsel in prominent pro bono matters involving education, fair housing discrimination, and racial violence. He received the Pro Bono Award in recognition of his work on one such case. 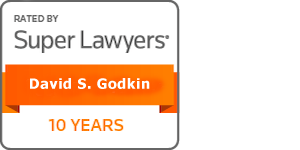