Jim Kruzer maintains a diverse business litigation practice, with experience in the areas of commercial, employment, and intellectual property litigation. His practice includes a special focus on defamation, disparagement, unfair competition, and other business-related disputes originating online. He has guided clients through all phases of disputes, including pre-litigation counseling, drafting and answering complaints, discovery, trial, and appeal.

Mr. Kruzer is admitted to and regularly practices in the state and federal courts in Massachusetts. He has also been admitted to jurisdictions throughout the country for specific cases.

Prior to joining the firm, Mr. Kruzer was an associate at Posternak Blankstein & Lund (now Arent Fox). He also served as a law clerk to the Justices of the Superior Court.

Mr. Kruzer has been named a “Massachusetts Super Lawyer – Rising Star” every year between 2012 and 2017.

Co-author of MCLE chapter on expert witnesses in employment lawsuits 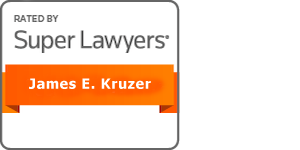